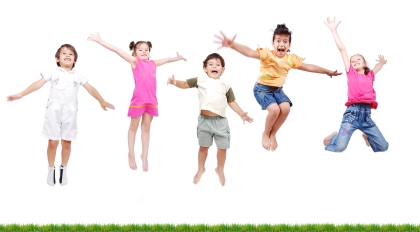 In the lessons prior to this, students learned about various pets, such as cat, dog, rabbit, bird, turtle, and frog.  (Actually the artwork shows additional pets that the children find in the pictures). The four verbs in this lesson are jump, run, hop, fly.

First of all, students practice each of the four verbs–jump, run, hop, fly–standing in one place.  It’s also important for young learners to learn “Stop!”  It’s fun to make it a game by saying these verbs several times (Jump! Jump! Jump!), and then “Stop!”  You can do this with music by starting and stopping the music.  When my students, they love to make interesting poses, too.

Secondly, put these four words into the chant pattern.  I like to do this as a fingerplay sitting with the students.

For jump, place two fingers in your palm, then pretend to “jump.”

For run, make your fingers move quickly in your palm.

For hop, place one finger in your palm, then pretend to “hop.”

For fly, move your fingers in the air.

You can place the four picture cards in the order of the song like this.  Put the three verbs in one row, and run in another.

You can see in the video that my students matched the animals to the picture cards.

Change jump to hop.  Then change to fly.

Here’s a video of some of my very young learners performing this chant.

Students extend this language by putting it into the phrase, It can _______.  Students are then able to talk about all of the pets they’ve learned about.

View all posts by magictimekids